It rubs the lotion on its skin 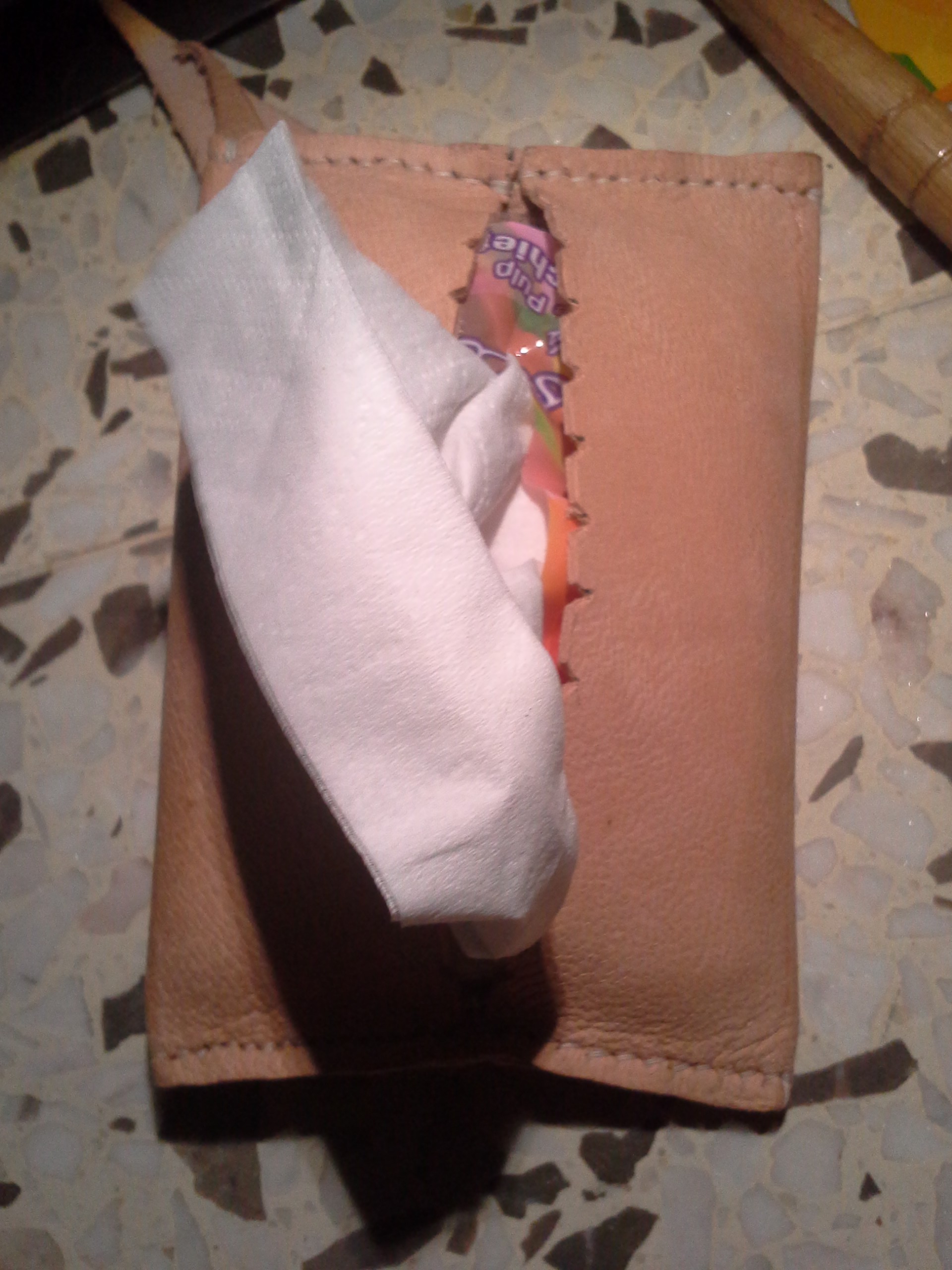 A couple of years ago I bought a packet of German leather scraps from Art-Friend. This was like 500g of randomly-shaped and -coloured offcuts for less than SGD 10. But I’m the kind of person who has a lot of ideas but little follow-through, so for a long time all I did with it was new insoles for a pair of sandals (maroon suede) and an abortive attempt to repair my husband’s cheap Ikea office chair (black shiny). 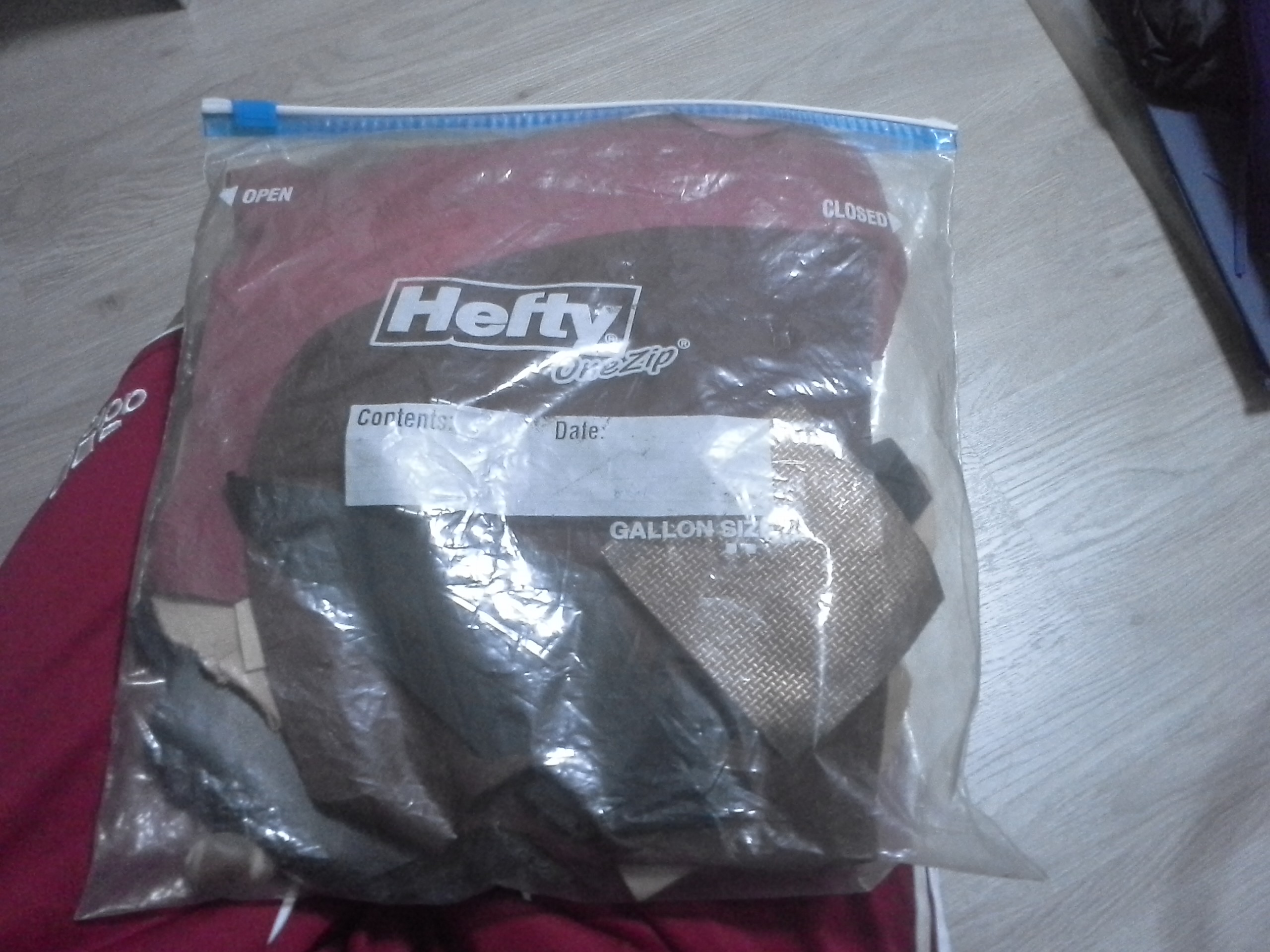 This side of the bag is showing some of the nicer-coloured stuff. The small square of copper-coloured fabric is in fact copper; it’s an electrode saved from one of Invitrogen’s iBlot Western blotting stacks.

Unfortunately I got a lot of this weird beige stuff that looks as if I killed and skinned a white guy. Makes me feel like the creepy dude in “Silence of the Lambs“. I was trying to think of things to make of it that would be both useful and not too human-flesh-looking and finally came up with a tissue packet holder. I have a tissue packet holder made of Sri Lankan bobbin lace and cotton fabric, but it’s got no stiffness so essentially useless at stopping tissue from falling out.

Anyway I read a few tips on how to sew leather but didn’t follow all of them. Saturday night when my housie and I were watching Miyazaki junior’s “Tales from Earthsea” (turns out it’s a mashup of “The Farthest Shore” and “Tehanu“) seemed like a good time. I cut one of the beige oddments into a rectangle; unfortunately was too lazy to even use a folded piece of paper to draw right angles, so it came out a bit senget as we’ll see shortly. Folding the edges to the centre would result in a pouch just big enough to hold a standard facial tissue packet, the ubiquitous seat-reservation marker in Singaporean casual dining. 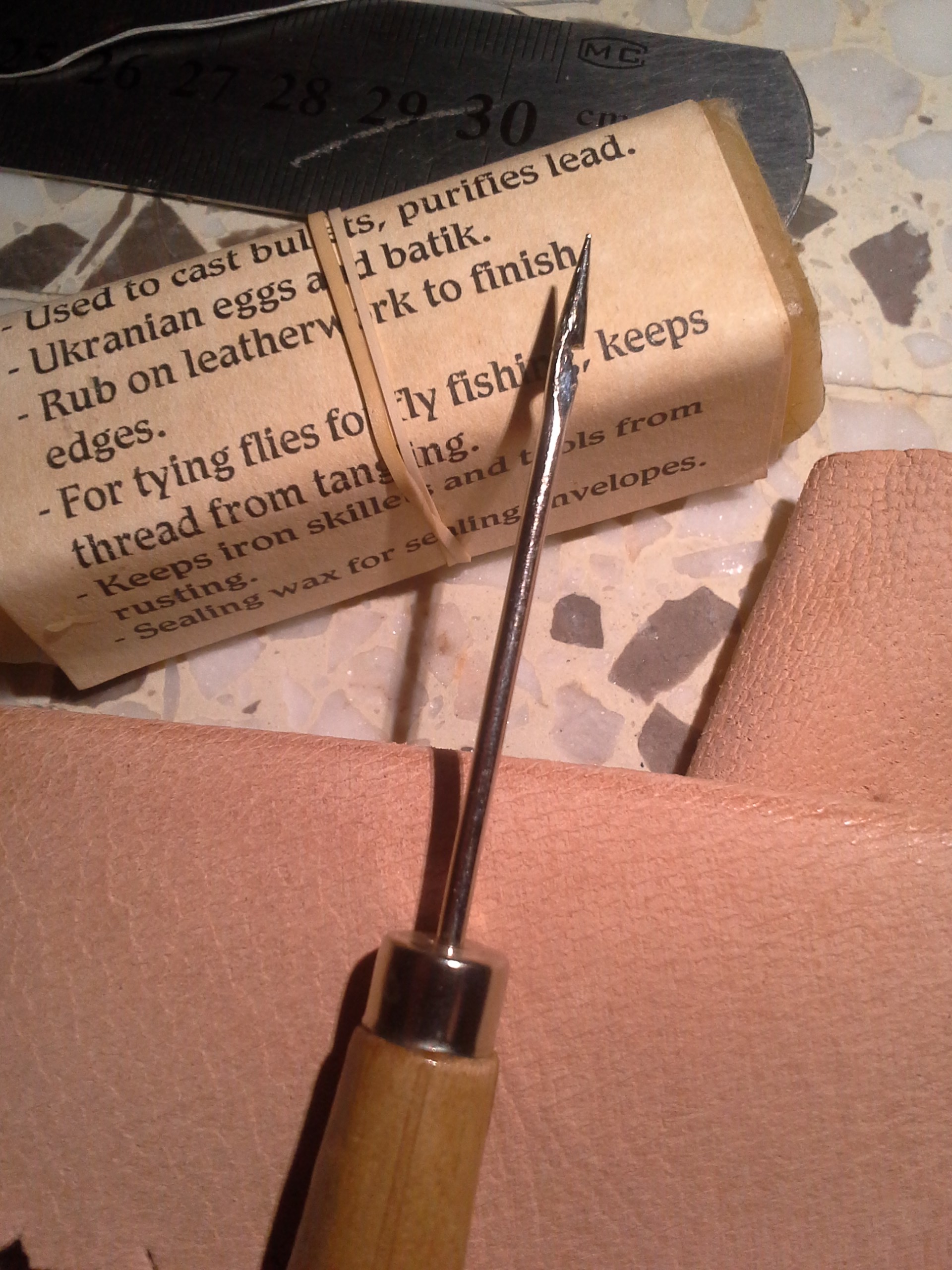 The seams were not glued before sewing – again, lazy. I used this tool to punch holes in the leather. It’s not an awl as it has a flattened spearhead with a notch – I bought it but have really no idea what it’s for. I waxed some white 100% cotton thread from Daiso by running it over a chunk of beeswax and doubled it up, threading one needle on each end. The punch and needles were both from the same “random cheap housewares” stall behind Chinatown MRT. 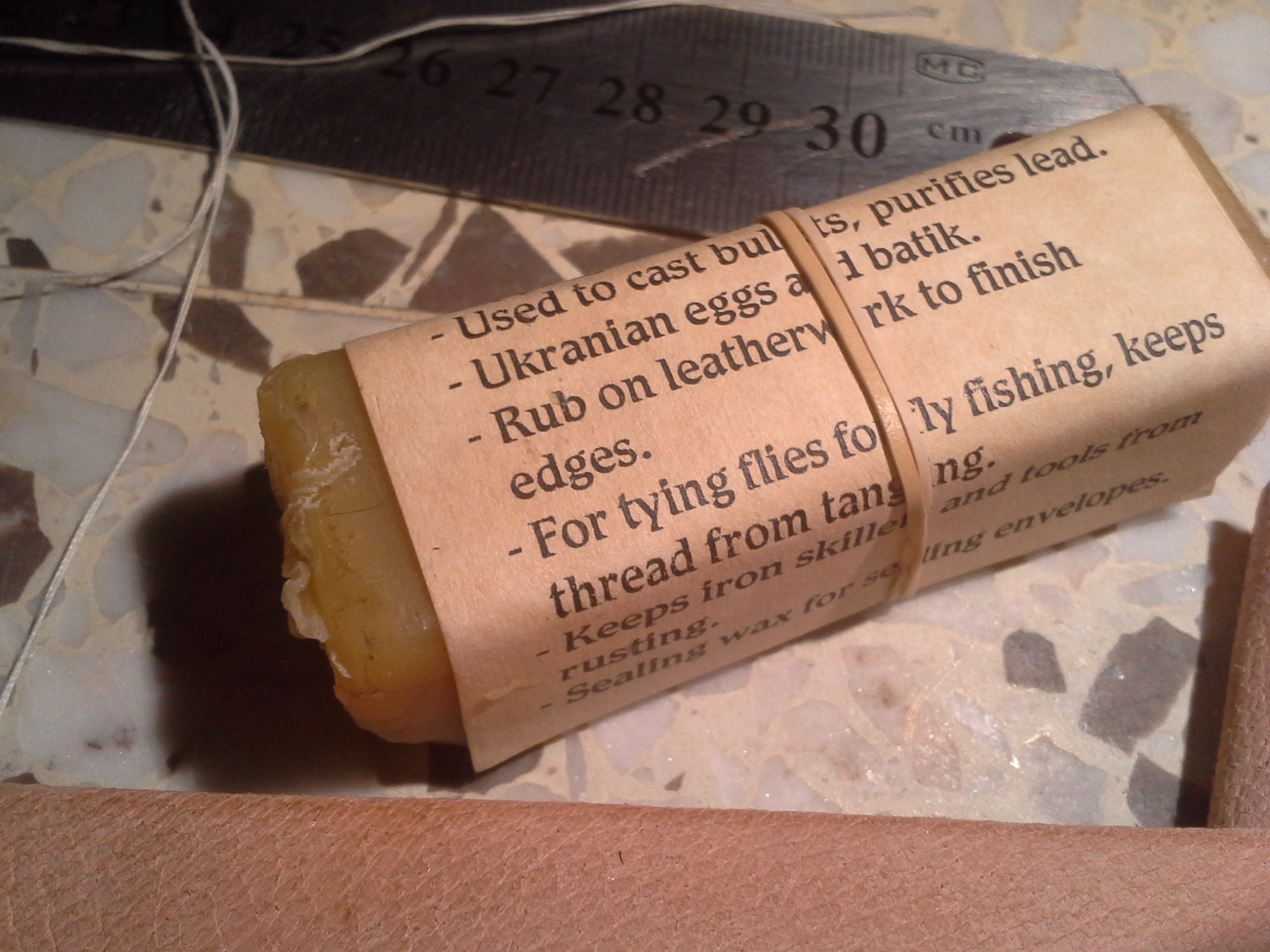 I punched a few holes at a time through both sides of the seam and just kind of held them aligned with my fingers while sewing through them, then punched more holes. From what I understand of the diagram on Wild Rose’s page, “saddle stitch” is basically two simultaneous running stitches alternating sides; you basically poke the needles through and pull thread in opposite directions at every stitch, not run up one and then run up the other. Like that picture of the woman sewing a handbag in I can’t remember what fancy designer brand ad.

About halfway through the first seam I decided I wasn’t happy with how senget the edges of the opening were, so I cut decorative notches in them to try to help disguise it. 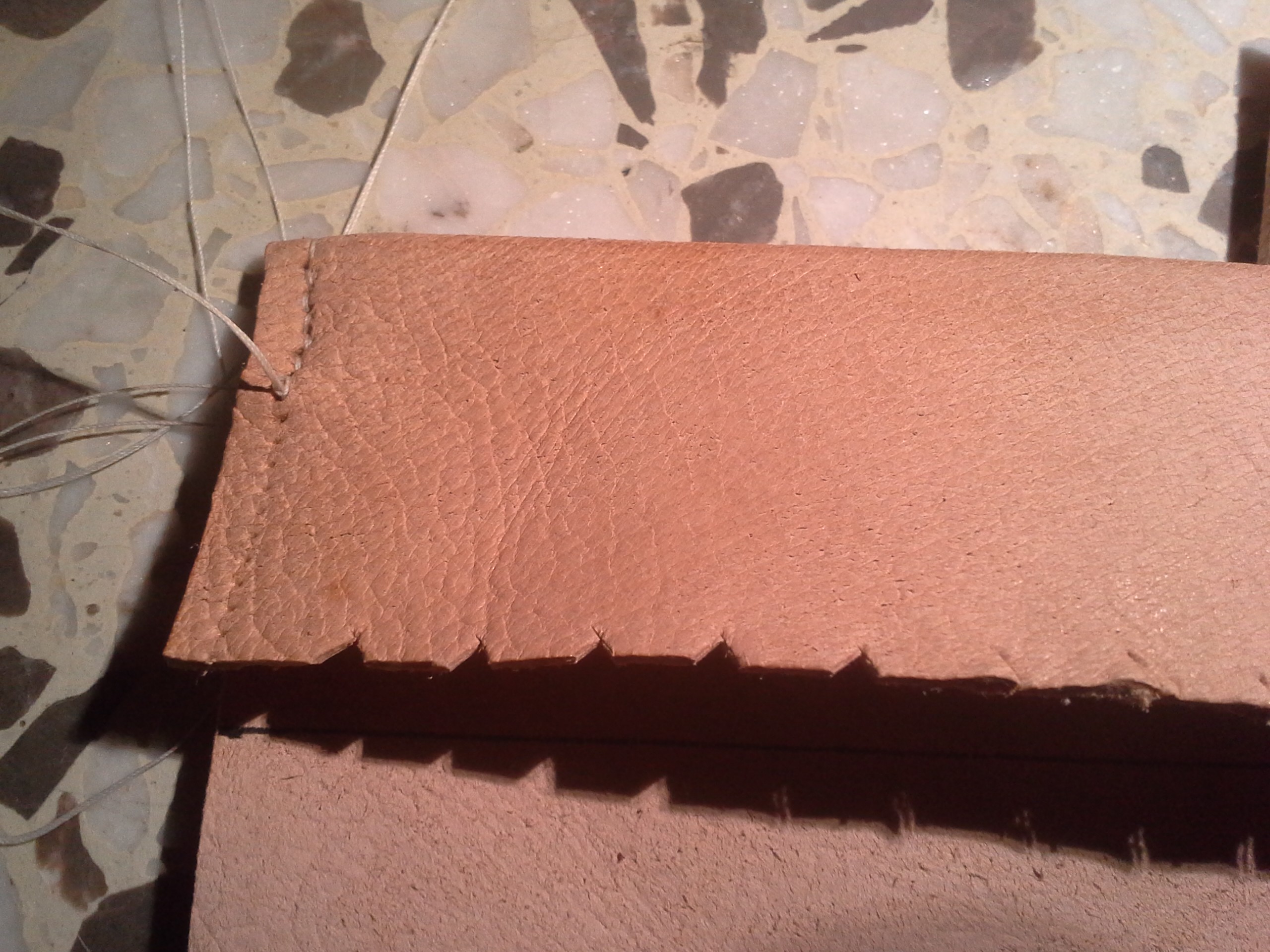 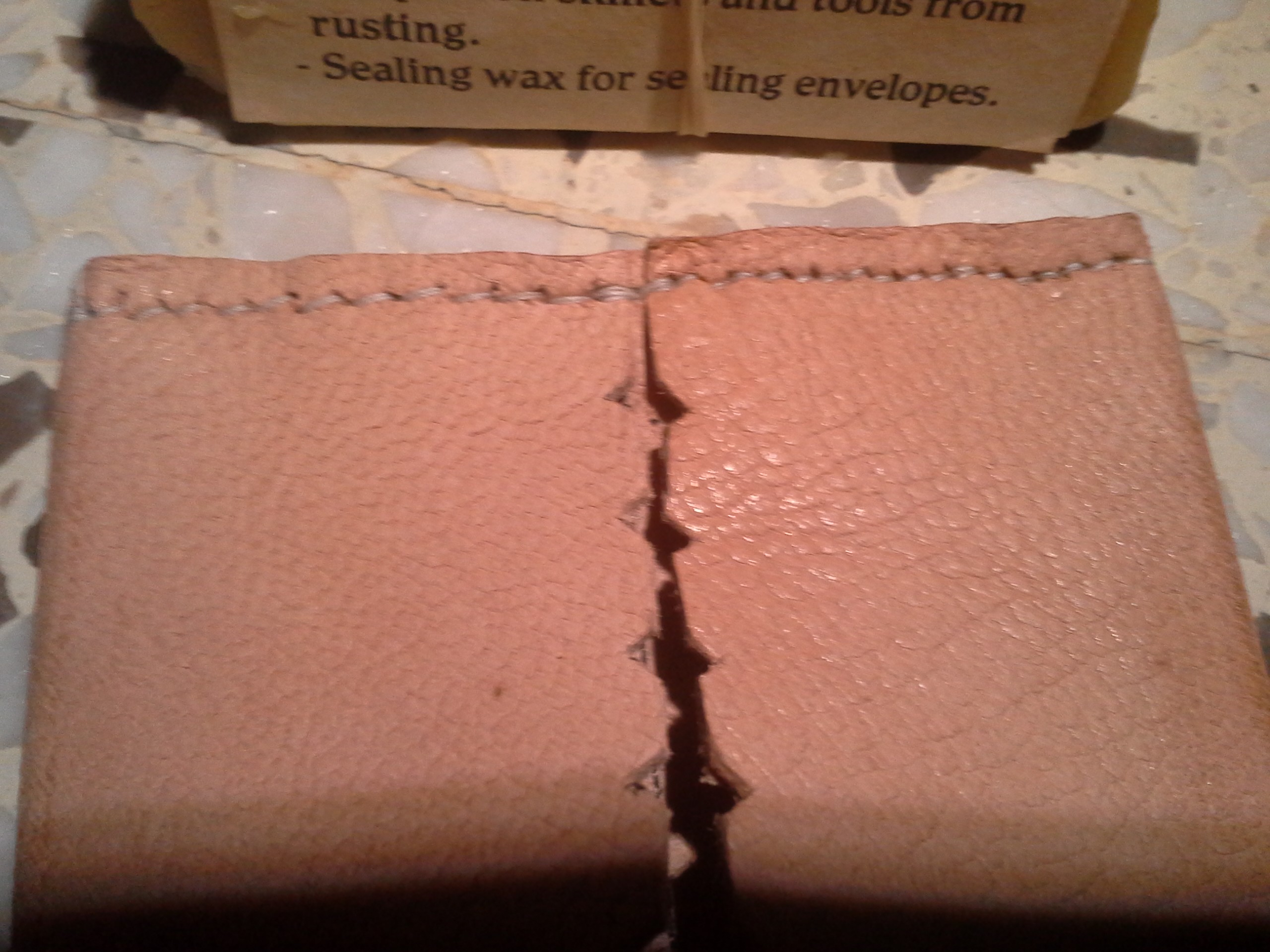 I would like to use my soldering iron to burn patterns into it so it doesn’t look so weird, but again given my style of doing arts and crafts projects, that might take another while. Haven’t waxed the edges yet either. 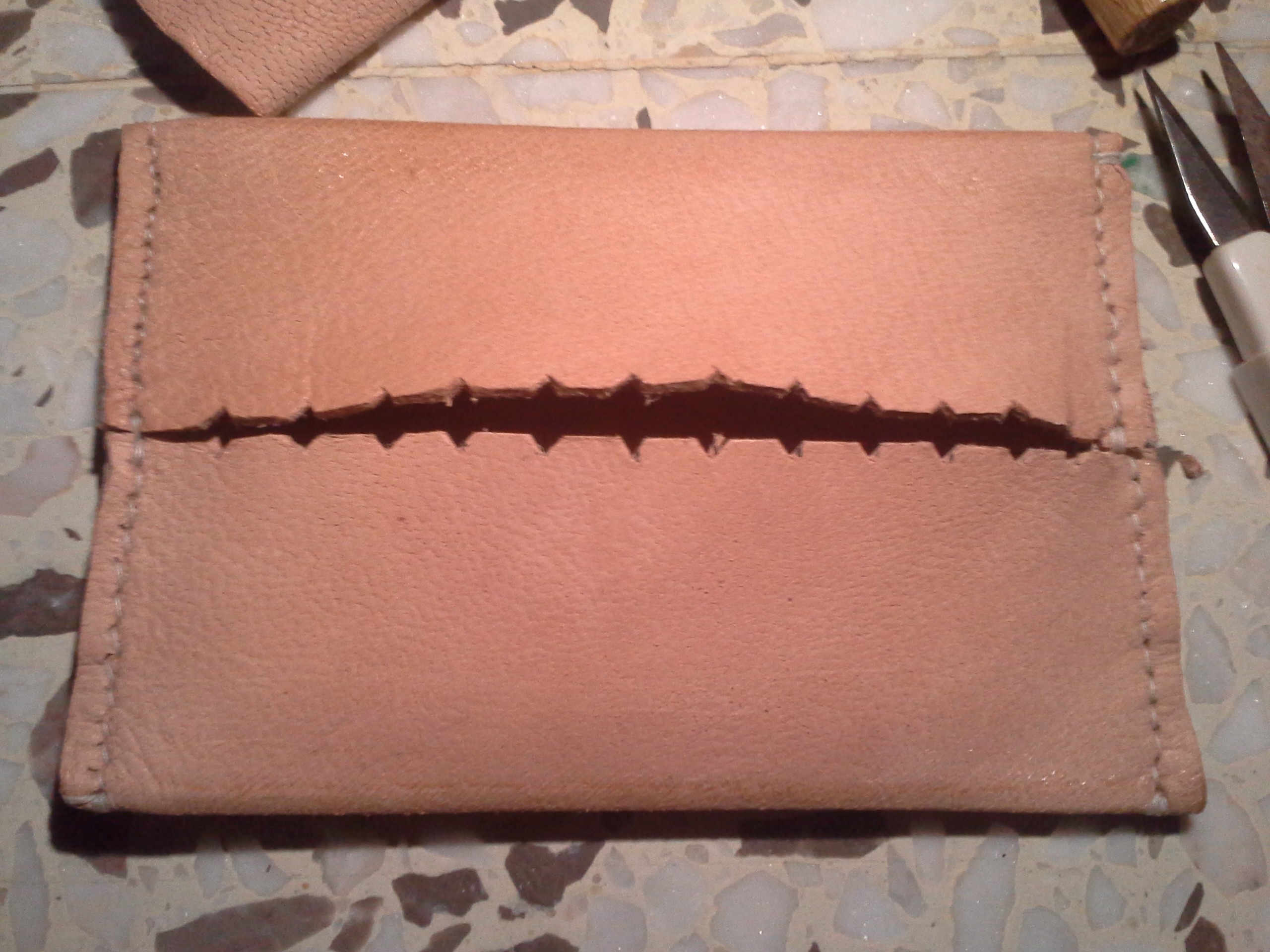 Anyway, I have a bunch more of the beige stuff if anybody wants a Buffalo Bill-style tissue packet holder…

This entry was posted in Uncategorized and tagged arts and crafts, procrastination. Bookmark the permalink.