Let me tell you why this adorable mini pencil makes me angry. It’s because I can’t have one. 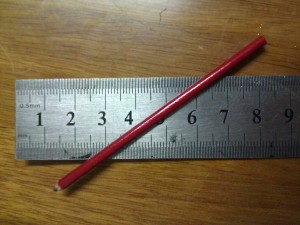 My spouse is an American citizen. Let’s call him Mr. Potato because he’s from the Midwest and he’s kind of that shape also. He used to live in Singapore with me but he’s gone back to his country for professional reasons (citer lain, jangan terpesong dari tajuk). A couple of months before the 2013 US presidential election, I started nagging him about applying for an absentee ballot. Of course since he’s a husband and I’m a wife, the nagging was ignored until about two weeks before the election. Then he finally went to his state government website to apply (like many other things that are centralised for Malaysians, voting procedures are by state in the USA).

I pointed out that two weeks probably wasn’t enough for the Wisconsin state government to process his application, mail the absentee ballot, USPS and SingPost to get it to us, and back. That’s when we found out you can PRINT OUT A FREAKING EMERGENCY BALLOT, for diehard procrastinators.

At this point I was quite annoyed already. Wahlau, this lazy mat salleh bugger can procrastinate so long and just anyhow print out a PDF borang from the Internet and that’s his legal election ballot…! Thinking about how complicated it is for Malaysians – registration is not automatic and there’s no way to do it online, you have to go to the post office or find someone who’s been given the forms and authority to register you, even if you’re in the country. As for those living overseas, registering to become a postal voter is a separate application to be done after registering to vote per se. The EC and Foreign Ministry only recently made it possible to register as voters and postal voters by mailing forms to local Malaysian High Commissions. It took a long time because the EC and Foreign Ministry seemed to be playing a game of “right hand doesn’t know what the left hand is doing”.

Anyway…as I said earlier, Mr. Potato had to go back to the USA for professional reasons, shortly after that, so we’ve been physically separated for several months. Che-che ka lu kong. cybersex isn’t anywhere near as satisfying as the real thing.

After I came back from a work trip to my company’s contract manufacturer in Europe, I found an official-looking manila envelope addressed to him. This was a week and a half after the election already. Of course, since he’s a husband and I’m a wife, I couldn’t pass up the opportunity to say “I told you so…” when sending him the photos of his ballot.

To my surprise, there was a hard, three-dimensional item inside the envelope. It was a tiny, delicate pencil, proportioned like a normal one wrought small, not like the “golf pencils” you find at library kiosks.

They send you a freaking mini pencil to fill out your freaking absentee ballot. Just in case – Americans abroad should not have their democratic rights abridged by an unfortunate lack of pencils. 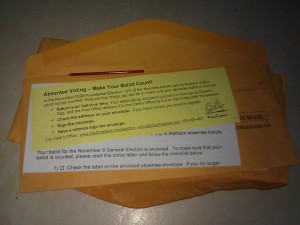 As a very famous American would say, it’s a muthaf___king mini pencil

That’s when I felt like punching the wall (except that walls in this part of the world are made of brick, not drywall as in the USA which is basically a thick sandwich of chalk and paper. So if you read American stories and there’s a scene where a character gets mad and punches a hole in the wall, it’s not because they’re superhumanly strong).  The unfairness was staggering. This is the 21st century. Malaysia, like the USA, claims to be a democratic country. Yet the USA will go to these lengths – online emergency ballot, free mini pencils – to ensure its citizens can exercise their democratic rights, but the Malaysian EC and Foreign Ministry make people jump through hoops like crazy to become postal voters or outright stonewall.

Even in the past, when full-time students were among the few people who were supposedly allowed to vote by post, there was this intransigence toward them. In the run-up to the 2008 GE, I and several other students in the USA tried contacting the High Comm in New York. They didn’t know anything. More recently, my second sister who’s doing her Master’s at Oxford (scholarship la, korang ingat kite ni kaya ke?), applied to become a postal voter and freaked out when her name then disappeared from the EC’s voter registration checking tool. It was gone for several months before reappearing. But they still haven’t informed her or anyone else on what the procedure will be yet.

Don’t worry la. I’m an honest person. I shredded my husband’s ballot even though the US election was over already.

But I kept the mini pencil because it’s too cute to throw away. And because I’m angry that I can’t have one. Last Friday, the Election Commission announced that Malaysians in Singapore, Brunei, the southern provinces of Thailand, and the Indonesian province of Kalimantan will not be able to vote by post.

So what? you might ask. You might say to me, You’re a professional in Singapore,  you’re probably earning several thousand Sing dollars per month. You can afford a budget airline ticket to go back so you should go back.

But just because I work in Singapore doesn’t mean I’m rich. I could in theory be supporting younger siblings still studying (actually yes) or elderly parents with medical problems (so far no, thank God). Or I could be working for a harsh employer who wouldn’t allow employees to take leave on short notice (fingers crossed). Or I could be one of the many migrant workers from Sabah or Sarawak who have much lower salaries, more expensive flights home, and long overland journeys on top of that. Even being that I am who I am, budget airline tickets to Malaysian destinations are probably going to vanish in an eyeblink when GE13 is announced, so I’m still probably going to have to pay several hundred dollars to exercise my democratic rights. 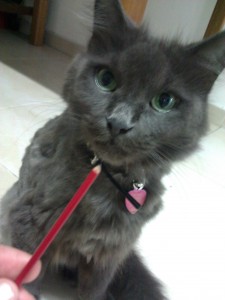 The mini pencil is on my desk. It reminds me that I don’t have the husband I love and the postal ballot that a supposedly modern, supposedly democratic country, owes me. Sexual frustration is one thing. Electoral dysfunction is worse. Yang tu lagi potong stim.

(If you live overseas, check out MyOverseasVote and Jom Balik Undi for information on what you can do. If you’re in Singapore, sign up for Bersih Singapore’s carpool list here, as a driver or a passenger.)
This entry was posted in Uncategorized and tagged cute stuff, democracy, malaysia. Bookmark the permalink.