Exodus: How Migration is Changing Our World (first impression) 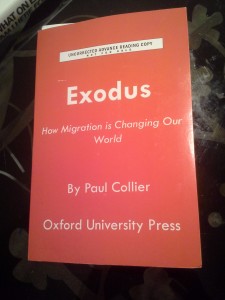 I’ve been pretty much hiding indoors sulking for a month since arriving in the USA (terrible, I know; there are so many people who want to be in my position). But I accepted the job, and now it’s dawning on me that I have two weeks left to Get Stuff Done before plunging back into a full-time position.

One nice thing about being back in the USA is that I can start ordering stuff as an Amazon Vine reviewer again. I got five books and a vacuum cleaner. Yes. An ENTIRE FREAKING VACUUM CLEANER. For writing a lot of opinionated book reviews when I was an undergraduate, free stuff every month for as long as Amazon sees fit.

One of the books is by Paul Collier, on migration. Naturally this is a subject of great relevance to me. According to the back-cover blurb, he thinks it needs to be limited for everybody’s good. He admits that persons like his family are in a sense “parasitic” which makes me rather uneasy because I have to admit that even though I hardly consider myself a jet-setter, me and mine are internationally mobile people.

I argue for a lot of counterintuitive things. I don’t think that necessarily makes me a hypocrite. I argue that Chinese Malaysians should hang on to southern Chinese languages (deprecated as “dialects” in Singapore and Malaysia even though they’re not) even though I’m a total banana, because I think that our history is precious. I argue that science and maths shouldn’t be taught in English, because they need to be taught in the most easily understood medium. It will be interesting to see this man who has a family scattered all over argue that people shouldn’t migrate so much.

Collier has a couple of other popular books that sound like stuff I should read: The Bottom Billion and The Plundered Planet. Exodus is supposed to be a sequel of sorts to the former.

Some of the Vine books are the first edition whereas others are uncorrected preprints. If I’d known The Hunger Games was going to get so popular I totally would have hung on to mine. Basket. The one of A Most Wanted Man had a handwritten note from John le Carre as the cover, which was pretty cool. This one is just plain orange with block lettering.

Anyway I’m still in the intro chapters where he’s laying out the problem. One line that jumped out at me was “One indication that democratic institutions matter is that a change of leader only makes a significant difference to economic performance if these institutions are weak.”

That means…BN’s claim that Malaysia will descend into chaos if Pakatan takes over is an admission that the government they’ve been running for fifty-plus years SUCKS.

This entry was posted in Uncategorized and tagged books, economics, migration, review. Bookmark the permalink.