Design of Experiments is a concept that I really think science majors, especially those who are going into life sciences where one has to deal with a great number of messy variables, ought to be taught at an early age, but aren’t. The practical side of life science education up to postgraduate level is sadly behind the times, as I’ve found over the last three years of having A Real Job since finishing my Masters’. (That’s also another reason I want to go back to school, to kick some ass and learn the stuff I should have learnt if I’d known better, which I couldn’t have at the time.) In Ronald A. Fisher’s list as summarised here, most profs get as far as explaining randomisation and replication and that’s it. No word on what to do if you don’t have enough cells on one day and have to run a third of the experiments next week (solution: blocking) or how to test a bunch of things at one time so you don’t end up wasting your life for a semester only to find out later that there was a critical interaction between two of the variables that you had tested separately (solution: factorial design).

Over the last few months I’ve been learning to use a DoE package, Design-Expert 8 and having quite a lot of fun with it. It’s been partly self-learning (the help file and the tutorials on the website are pretty good) and partly a training workshop conducted by the good people at Prism TC, a UK statistics consultancy. It’s helped to reveal some things that my supervisor and I had “hunches” about regarding a critical, but antiquated and laborious assay and to validate some changes we wanted to make to the assay to make it less of a pain in the ass to perform. On the other hand, it’s thrown up some interesting results in showing us which factors didn’t have a significant effect on the results we were looking at. Once you get used to it and have some data to work with, playing around with the graphs and so on is pretty entertaining. It also has an Optimization tool for finding the best combination of settings to achieve desired goals – multiple ones with different priority weights.

Outside of work, one thing I would want scientific proof on is whether or not the bombastic claims on various cosmetic products are true or not. (Stop reading here and f___ off if you’re the kind of person who likes to make nasty comments about others’ appearance.) I’ve been a nail-biter since early childhood – I have memories of my mother telling me off for it at an age where I had to stand on a stool to brush my teeth. In Form Five (age seventeen), my best friend nearly reduced me to tears by telling me my nibbled cuticles looked disgusting. Since becoming able to wear nail polish as an adult out of school, I’ve largely stopped biting but can’t stop picking at them, especially when bored or stressed. So I’m always looking for some kind of magical nail polish that will let me have nice nails.

I’ve been using Orly Sheer Defense off and on for the last few months but it’s got a number of flaws: it’s got a thick texture and takes a long time to dry, while “sheer” it’s also a nasty yellow colour which makes your fingers look like a smoker’s, and even when cured has a  plastic, easily-scratched texture, especially after several coats over the course of a week (instructions are to apply every other day). One of my male friends, who borrowed it because he’s also a nail-biter, thought the name was funny because it’s like the O RLY? meme. After going through most of a bottle, that’s my response also.

The other day I saw a new Sally Hansen product in Watson’s, so I was like, why not. The name – Nailgrowth Miracle – is even more eyebrow-raising, though. It’s also described on the packaging as a “strengthener” and the instructions are also for alternate-day application, so I guess it’s a good product to compare.

The packaging is pretty sparkly – IIRC the Orly product came on a card. The reason the cap of the Orly product looks like crap is because it’s rubberised. Rubberised finishes on thingies are all very well in terms of ergonomics but they collect dirt like a kindergartener in a white uniform, which is not really the effect you want for a cosmetic. 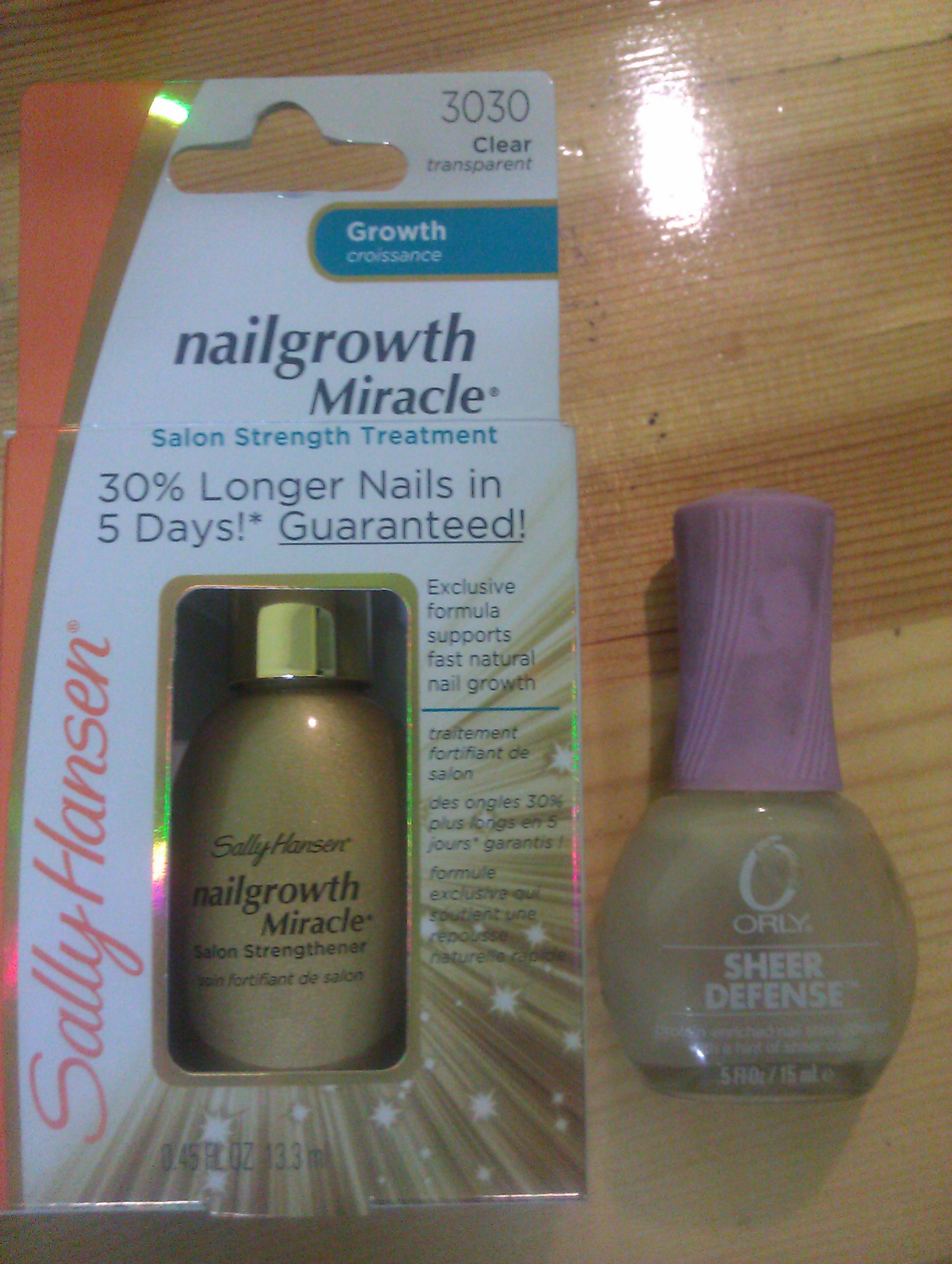 I can’t find the Orly product on the official website so it seems to have been discontinued. The only page I could find was from this gibberish-filled and extremely dodgy-looking third party site. The bottle itself doesn’t have the ingredients listed and I threw the card away long ago. It does, however, say “protein-enriched”. As above, the Sally Hansen product contains hydrolysed protein from both plant (soya) and animal (collagen, keratin) sources. I’m no biochemist, but in the case of either product I’m kind of sceptical that topical applications of protein to one’s nails will actually stick…

Anyway, I want to find out whether either product will actually make my nails grow longer. For me, the effect of wearing nail polish seems to be mostly psychological in that it helps me to be more conscious of my nails and not pick on them so much, rather than making them hard enough to resist picking. However, the claim on the Sally Hansen product of “30% Longer Nails in 5 Days!* Guaranteed!” is too dahsyat not to test…let’s find out. (Actually the asterisk is only explained on the back of the box – it says “Nail tip measurement”. I assume that means the white bit.)

I downloaded the 45-day free trial of DX8 and installed it on my home computer (already have the full version at work). By the way, if you’re lost on any screen, click the lightbulb icon at the top. It brings up screen-specific help. I started by creating an “Optimal” factorial design:

I chose 3 factors: Nail polish (the one I really want to know), Side (because I’m right-handed, the nails on the left side tend to get picked more), and Finger. Going to the next screen (Model Selection), I instantly run into a problem: it wants to generate 21 runs. I clearly don’t have that many fingers; even if I recruited my toes, I would be one short. Leaving all the other things on the screen on their defaults, I try setting the “To determine lack of fit” runs to zero. These runs provide additional data beyond the bare minimmum model points to check if the mathematical models generated actually fit. DX8 doesn’t like this: 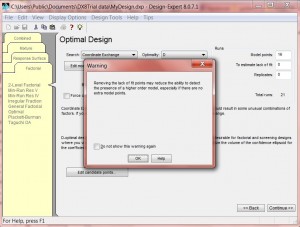 Nevertheless, I press on, and also reduce the “Model points” to 10. This is even worse, at it tells me that the 16 runs given are already the bare minimum needed to estimate the coefficients for the model. 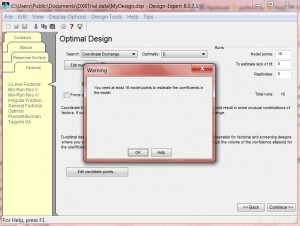 Back to square one…I decide to remove one of the factors, Finger. This means that I will have no idea whether the five nails on each hand grow at different speeds, or get picked at/bitten more, but practically speaking, this is the least important factor. This gives me only four runs (two factors, times two settings each). I manually increase the number of “Model Points” runs to 10.

The next screen asks you to choose the number of responses you want to look at. In my case, I’m going to look at “Delta” the difference between each nail’s length (from natural cuticle to tip, measured at the centre of the nail) in millimetres, from Monday 13/8/2012 and Monday 20/8/2012; as well as “DeltaTip” in percent since that was the basis of the claim for the Sally Hansen stuff. It says 5 days, but a week is fine as I’m planning to use the digital micrometer calipers at work and I have no desire to go to lab on Saturday if I can help it. So I will be measuring the length of the entire nail, and the length of the white tip, on day 0 and day 7, calculating the difference in length, and also normalising that difference as a percentage for DeltaTip. It occurs to me that one way the Sally Hansen product could achieve its claim without actually making your nails longer is to make the quick part, the nail bed, recede, but that seems unlikely. The screenshot below only shows Delta as this was before I forgot to check what the claim on the SH product actually said.

There’s an “optional power wizard” that lets you calculate whether your design is powerful enough to detect a target difference in the response but I’m ignoring it. The “difference to detect” that you want should be based on historical information on how much variability is usual. 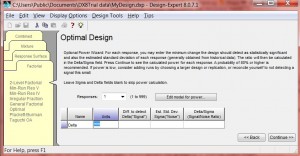 Finally, when you click Continue in the last screen of the design wizard, it generates the design and brings you to this table called the Layout of Design. You can right-click on the response column headers to add a new response manually, which is what I did to add in DeltaTip after the fact. The column called Standard Order shows the runs sorted in an organised fashion, one factor after another. Run Order is randomised to prevent any effects due to time, which could be thrown up by the operator doing them in Standard Order (for instance, if the products made my nails grow really fast and I was lazy and measured my right hand on day and my left hand two days later, it would show a false effect of the Side factor). 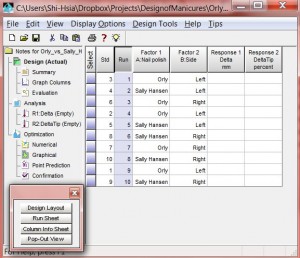 WordPress isn’t letting me upload the .dxp file “for security reasons” so I’ll put it up by FTP another time. Tomorrow I’m going to take pictures of my hands, measure my nails (again, the total nail length and the length of just the white bit), and apply polish for the first time.

This entry was posted in Uncategorized and tagged cosmetics, homescience, statistics. Bookmark the permalink.

1 Response to Design of Manicures