“Sere” isn’t a word one would use often in my country, but it well descibes my husband’s: withered, dry, just after the solstice of an unusually snowless winter that leaves the brown grass naked. Even though it has been mild enough this year that a few clumps of vivid green grass remain along Milwaukee’s Root River parkway, the land looks like I feel – dry and withered.

While I hate being cold, I’m rediscovering that it’s the darkness and aridity of winter that I really can’t stand. One can always bundle up against the cold, as I did in my snowboarder/bank robber outfit used for cycling in up to six inches of snow. There is no defence against having the moisture constantly sucked out of one’s body by the air (having had Lasik a few months ago, I’ve also realised that a function of spectacles is to protect one’s eyeballs from the wind) nor against the gloom that sets in at four and lightens only at eight, especially since Americans still like those jaundice-colored incandescent bulbs. I lived here for eight years, but shoot me if I ever go for another winter holiday.

Leave it to wealthy Singaporeans and KLites to splurge on ski vacations to Korea or Colorado. Since my family’s first stint in the USA, I’ve associated winter with death. Images of brightly-clad children running about in the snow are a meaningless cartoon to me. Snow is what you stamp about in to clear a tiny space while I wait in the dark for a bus that never comes, and the breath freezes in my lungs. Gopal Baratham wrote that for people in the tropics, a dream of winter is essential. The converse has been true for me during my long schooling and apprenticeship, and for the last two weeks. 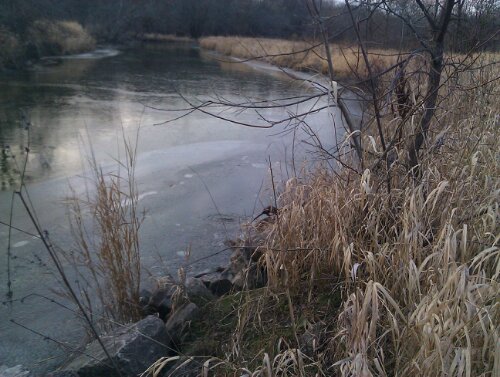 A weasel, or something from the weasel family at any rate, which popped out of the withered grass and turned its cool, beady gaze on us for a long moment before diving through a hole in the ice like a miniature seal. We stared amazed as the blebs of its exhalations traced a minute-long circle across the frozen creek, then it clambered out and disappeared back into the grass. We waited as the rustling of its movement continued, and were rewarded with a repeat performance shortly. Poor weasel, neither dive yielded fish nor frog.

In what I feel as the deathly cold and darkness, some not only survive but still hope for prosperity. Happy New Year.

This entry was posted in Uncategorized and tagged climate, travel, USA, wildlife. Bookmark the permalink.